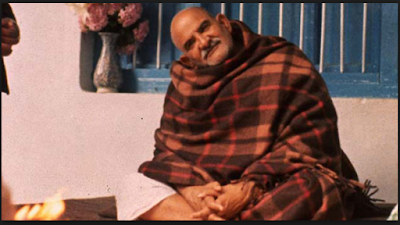 I will try to be as truthful as possible and may Babaji forgive me if I write anything wrong by mistake or otherwise.

It was all well planned from Siddhi ma`s side it seemed. I went out of the house and found an empty battery vehicle which I was thinking that i will not get. I went to metro and it came. Sudha ji met me and we boarded the train. This time we had the agenda to take classes also at Kainchi. One student had registered and we were contented that Babaji has arranged atleast ojne person. We hope to teach more and more people these sciences so we pray with our heart to Babaji for the same.

This we had thought that we will go to Bhumiadhar for sure and that was in our mind all the time.

We went to the hotel and after getting ready we went straight to temple. There was a lot of crowd due to he ceremony and lot many people occupied that Ashram premises.
The ceremony was on that day only and Sudha ji recorded it in due time.

We were lucky to witness the occasion although we were not exactly in the premises. Next day our only student had to come and there was bhandara too next day. On next day he turned up and took the Reiki initial class from Sudha ji and I was doing my astrology work.

On that day Maa Durga saptshati shlokas were recited and many Brahmins had come from outside for the recitation. It was all very absorbing. We did a live Video there to tell people about it all.

It was getting late so I went to have the bhandara and as always the food was very delightful. I was having the food and remembering the Gurupurnima day when we were there. I was thanking siddhi maa to allow us to be there. 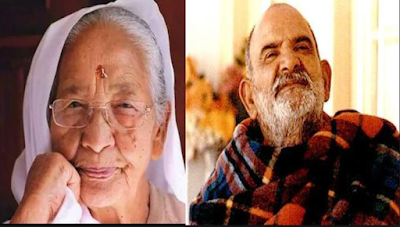 While having I thought that Sudha ji too must be hungry and the lone student must be hungry too. So I took one plate meal and came back to the place we were staying. The course was about to be over and I said better do break and the student went for the bhandara himself. He is himself a devotee of babaji.

The student came after lunch there and then Sudha ji gave her attenuation of the Reiki. 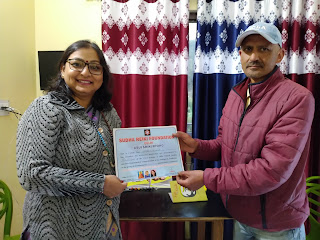 It was a full moon night and we had dinner and we strolled, the mistake we did was not carrying enough clothes for winter as we were not suspecting it to be so cold.But it turned out that it was like December of New Delhi.

We went inside the premises again and we saw the holy feet of Siddhi Maa Maharaj. Babaji used to tell that She is Devi(Goddess) katyayini and that is why he had to come. I do not remember the book in which he had said it. 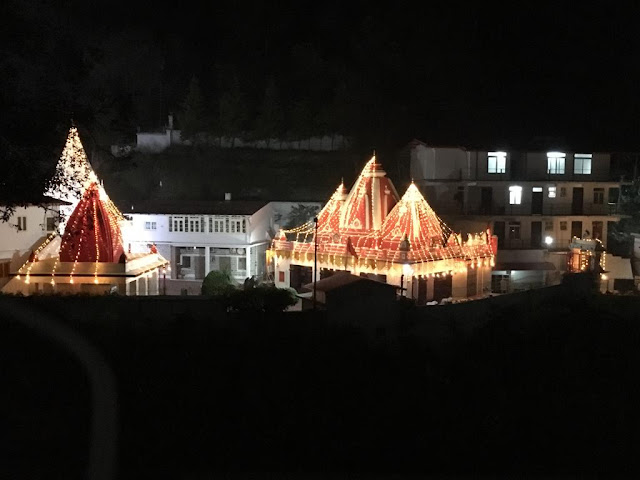 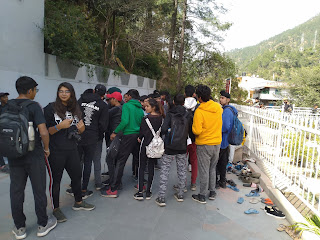 The whole premises came to life in he night and it was simply beautiful and soul warming to be there. The next evening we had tea and pakoras and went to the premises, we were thinking that it will be closed but it wasn`t, satsang was going on and Hanuman chalisa paath was being recited and some other shlokas were being recited. We got the evening prasad, we sat in the Bbaji`s room which was decorated beautifully at some other time and we had the darshan of the holy feet of Maa Maharaj ji.

On 26th there was ending of the ceremony and we saw so many people returning.
We had told the cabby to come at 6 but he came late and we had tio hurry for Bhumiadhar. It is on the way itself and we had the darshan of Lord Hanumanji which were initiated by Babaji himself. 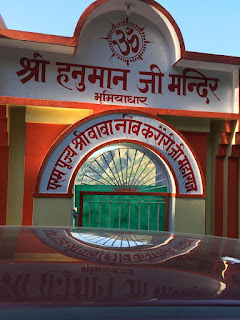 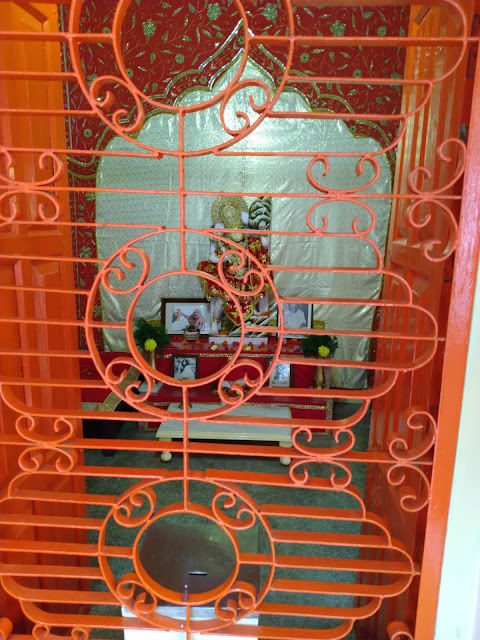 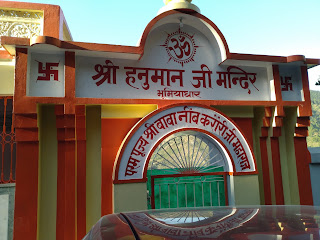 It was really getting late and we rushed tot he station and managed to get into the train 10 mins before its departure.
We had already got the food packed but when we opened the packet it was torn and the gravy was all in the bag, the quantity of the chapatis or the paranthas we ordered was also not the same which we ordered.
Any way Sudha ji like bread and cutlet a lot and later we did got it and I had ordered fooD from IRCTC services and that was a blunder I made. The food was filthy in simple words so I had to throw it away. 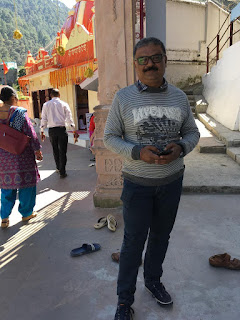 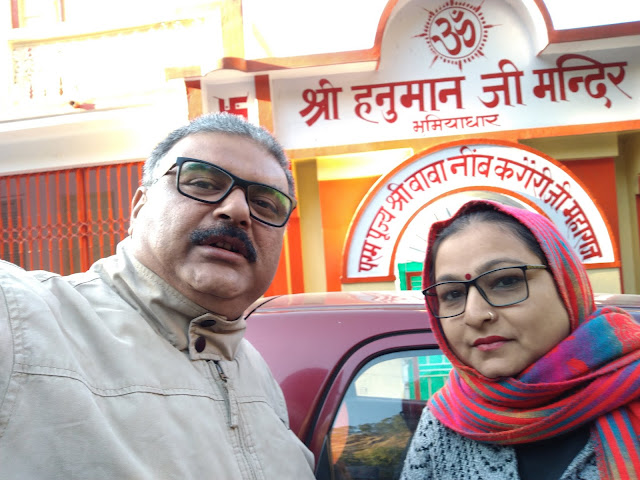 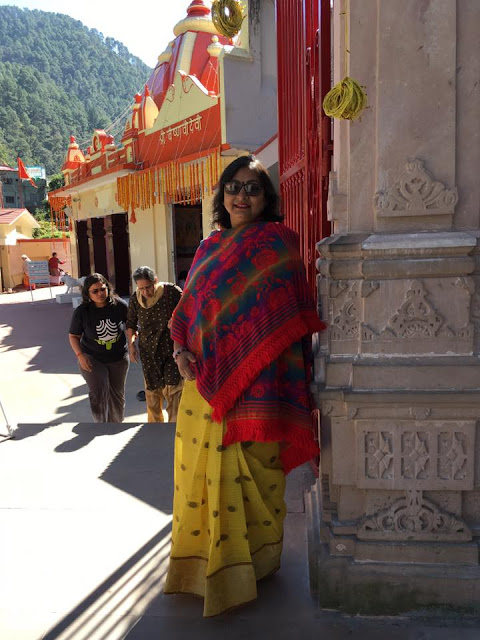 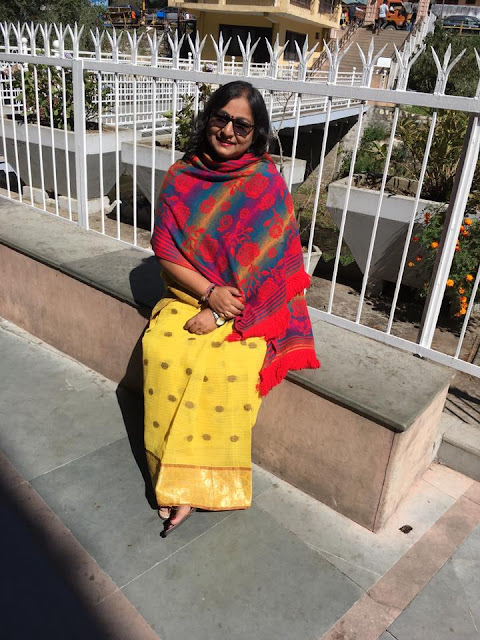 The live video we did on 24th:

An another strange incident not connected with Kainchi but I want to report it here:
I went to a small town where my sister lives on the occasion of Dipawali and bhai dooj. On the way back she prepared poori and mutter paneer sabji. It was very cold and crowded as I was in a sleeper coach. Due to chhath pooja and returning traffic of Diwali the train was packed. The train reached Katni Murwara station and I requested fellow passengers to give me space to eat and I opened my tiffin.
Just as I opened it an OLD LADY came and she asked for nothing but food, she said "Roti hai kya" and I was having pooris and I gave her some then I thought how will she eat it dry and I gave her sabji also.

It was really astonishing and bewildering, There were many people to whom she might have gone for food but she came to me, since few days I was praying to Maa Maharaj and in facebook posts also she was coming frequently and I was praying to fulfill my wish which some one knows very clearly. She was Maa Maharaj or Babaji, it cannot be a co incident of any kind. I have faith in Bbaaji and Maa maharaj.

And I told this to Sudha ji and our messenger Mr Arun Sharma ji.

One more thing came to my mind just now, a few months back I was simply going through facebook and I was thinking about Babaji and his head, I remembered that in one book it was mentioned that a foreigner lady wanted to kiss his head and he presented his head in front of her and she did kissed it and felt with joy, and This thought was going in my mind and i was telling babaji show me your bald head and I also want to kiss you - A childish thing but to my surprise the next photo which came was of Babaji with hi Bald head and I started weeping and Kissed his head.

And I always remember dada what he said- "only and only if he wishes" , people may think that it was a co incident but I know that it was not.

DO NOT LEAVE US EVER AND PLEASE I BEG YOU FULFILL MY WISHES WHICH I ASK YOU DAY IN AND OUT.