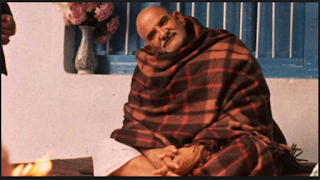 It all started from Kainchi. Me and Sudha ji thought that we will come to kainchi atleast for two days in a month. Nothing comes for free so that thought came that why not start doing something here which will give us some monitory benefits and so we asked Mr Dinesh Tiwari whether he will help us or not and he said yea sure I will be doing what ever I can. So we ordered a flex of Reiki , Astrology, Numerology , Palmistry, Sujok etc and Mr. Tiwari helped it to be hanged in the best visible place. Two calls also came. 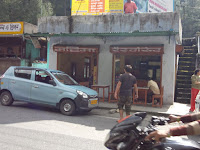 Neverthless, we also got our pamphlets printed and now is the time to distribute it.

I came back after that and I told Tiwari ji that I will be coming in the navratri too and please book my  space for 17,18,and 19th and he said okay. I also booked my ticket to go. I got a bit egoistic that Babaji will arrange for the money anyhow as he is doing since the first time we went there.


BUT SOMETHING ELSE WAS ABOUT TO HAPPEN.

My friend Sharmaji who has now become the messsenger of Babaji for us, sent me a wattsapp forward about the ashram temple Gupt mandir at mehrauli New Delhi and I told Sudha ji that Babaji ka bulawa aa gaya hai and we will go. She is always ready to visit places where ever Babaji is there and so we went to this Gupt Mandir. 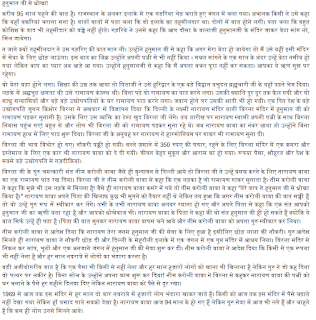 Gupt is a Hindi word which means secret or hidden. This temple is supposed to be hidden but now it is on google maps and anyone can go there but I am sure this blog will make it easier for you all to reach there.

To our surprise, we took a share cab, on the Google maps it was showing that we have reached but there was no mandir etc. The place where we came out had a Hanumanji Temple and a Mosque along side. We asked people there but no one knew about it. Google maps was damn sure that we have reached there. we asked few autowallas and they were too confused. The we saw two ladies passing by and Sudhaji asked them and they pointed towards the park in the front of the Hanumanji temple and said there is a very old man babaji living there and you better ask there.  To avoid any kind of plagiarism I have taken the screen shot. one can download and read it. We went inside the park and I saw one person coming and I asked him, Babaji temple and he smiled and said yes go in this direction.
Finally we reached there and to our surprise, the story came out to be true as told in the wattsapp forward. 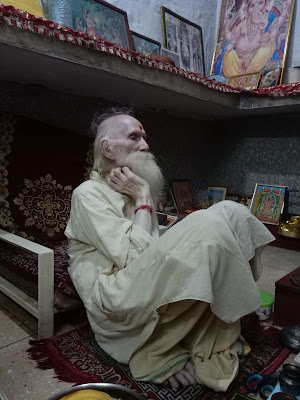 This 94 years old person is baba Narayan Swami who lives alone there. one can read the entire story and for translation you can wattsapp me on 7566384193 or in you are planning to go there then also you can ask me for the how to reach thing. Will be really happy to help you all.
So we went there and he asked us How did you people cam here as this is a Gupt mandir. We said a known person sent us the story and we came searching for you. He said it is the wish of BABAJI only that you are able to come and not otherwise. and we said Yes.

It is a fact, That ONLY AND ONLY  BABAJI WISHES THEN ONLY WE CAN MOVE A INCH OR MORE TOWARDS HIM, IN THESE MANY MONTHS I HAVE REALIZED IT TO THE FULL.

We sat there for a while and kept asking Babaji many questions and irritated him I think but he didn`t lost his cool and we took his permission to leave and came back to our place. 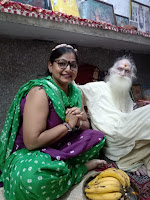 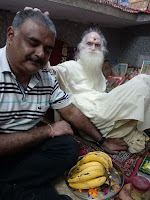 Sudhaji on the same evening posted the whole incident on her Facebook and many people read it and wished to go there and so today we went there. It was finalized that we all will go on 14th and will have prasad there. We started and reached at the given time. The sweets and Halwa were waiting to enter my belly and as soon as I reached there the first thing I did was to eat it. Baba Narayan swami ji was sitting outside and was in a good mood it seems but also in a bad mood because of the crowd that was about to come. 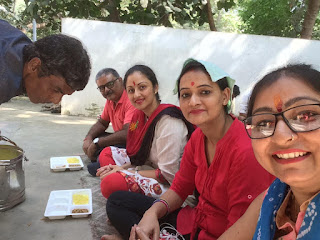 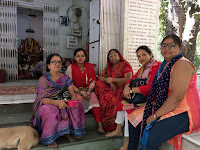 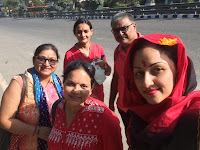 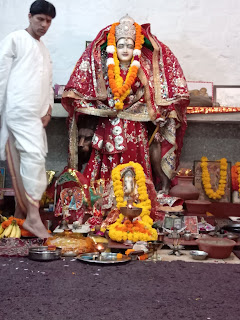 This gentleman here is Son of babaji. His name is manmohan or madan mohan ji something I do not remember correctly. But he told that when he was born, Narayan baba went to Vrindavan and told babaji that he has got a Son and what should be the name and Babaji said "Hanuman" should be the name. And so his name Hanuman was given by Neeb karori baba ji himself.

He was telling his story that "it is only BABAJI who has kept him alive for so long as he has met with many accidents from tip to toe and every time it is babaji who saves him".

The moral of the story again is that what ever Babaji will decide will and will only happen and not anything else. Let me tell you very frankly that Babaji is very mischievous(मसखरा ) and will not hesitate in taking your test every now and then but rest assured it is him and only HIM who will be there to hold your hand and make you stand on your feet when you have lost all hopes and the world will be very dark .
One more thing I want to emphasize here, this temple is almost directly in front of Hanumanji Temple and Dibiya Waali masjid. Both Hindu and Muslim population is there and the majority is of Muslims may be.

IS RELIGION GREATER OR HUMANITY: CAN RELIGION FEED A HUNGRY STOMACH OF A KID OR GROWNUP?

In the bhandara today, we saw both Hindus and Muslims sitting together and eating together having the prasad of Mataji. India has always been in such a way but the filthy politicians and guttery politics has changed many things. I was just saying the same thing that many Muslims were there too and the senior of Sudha ji said it is not Hindus or Muslims but hunger and the need to fill stomach is main thing. religion etc is nothing humanity comes first - may be she meant this or something else but I interpreted this meaning only that we are all humans first and Humanity is the first thing we should possess in ourselves.

One day i was having this debate with Sudhaji and she got very furious by listening to some talks of mine and finally I had to agree that she was right to a very great extent. Although there are many plugins which are required but anyway.

I have somehow developed this feeling that he is always watching us and is making things the way they way they should be and not the way we want it. If you do want things to be as your way then you have to literally yell at him. And then also there is no solace, whether he will give a single thought to what you are thinking or not.

I WAS NOT ABLE TO GO TO KAINCHI DHAM THIS TIME ALTHOUGH I HAD BOOKED TICKET AND I WAS IN FULL MOOD BUT THERE WAS NO MONEY SENT BY HIM, NOW I REALIZE THAT HE WANTED ME TO BE HERE AT THIS TEMPLE BECAUSE ONCE I HAD THOUGHT SOMETHING WRONG ABOUT THIS TEMPLE BECAUSE OF THE MISINFORMATION OF THE INTERNET ETC.

SO IN A WAY IF YOU WANT TO COME HERE THE KEY IS THAT THINK SOMETHING BAD ABOUT THIS TEMPLE AND HE WILL DRAG YOU HERE ALL BY HIMSELF. YOU WILL NOT NEED TO MAKE ANY EFFORT AT ALL.

SO WE CAN MAKE PLANS AND PLANS AND BOOK TICKETS AND WHAT NOW BUT THERE IS ABSOLUTELY NOTHING IN OUR HANDS. IF YOU DON`T BELIEVE IT - TRY IT!!

HE IS MY LOVED NEEM KAROLI BABA JI

HOW TO REACH: YOU CAN TAKE DMRC YELLOW LINE AND GET DOWN AT QUTUB MINAR. FROM THERE TAKE A WALK TOWARDS CHHATARPUR METRO STATION AND IN THE WAY YOU WILL SEE A PARK ON THE RIGHT SIDE. YOU SHOULD ENTER THE PARK AND ASK FOR THE TEMPLE THERE IN THE PARK AS PEOPLE OUTSIDE ARE NOT MUCH AWARE OF IT. YOU WILL SEE A HANUMANJI TEMPLE AND A SMALL MOSQUE ON THE LEFT SIDE AND THE TEMPLE IS JUST OPPOSITE SIDE IN THE PARK.  FEEL FREE TO WATTSAPP ME ON +917566384193 TO GET MORE DETAILS BUT THIS IS ENOUGH TO REACH THE TEMPLE.

LOVE LOVE LOVE YOU BABAJI EVEN AFTER YOU HAVE MADE MY LIFE-- YOU KNOW HOW-- I LOVE YOU THE MORE BUT I AM WAITING FOR MY DAY ALSO AND I KNOW YOU WILL DO IT ALL WHAT I WANT. YOU WILL--- MY NEEM KAROLI BABAJI. 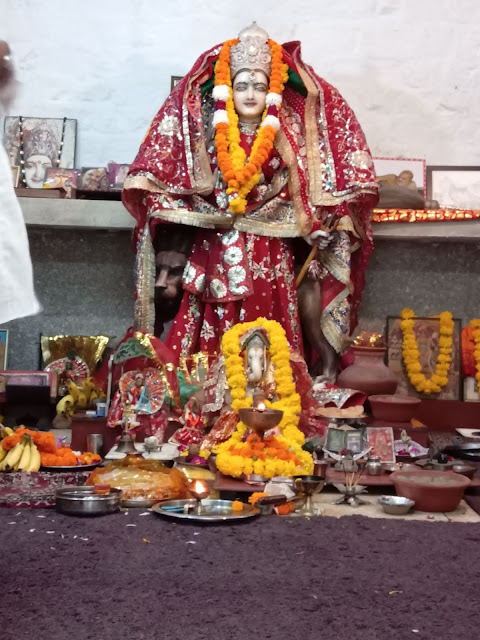