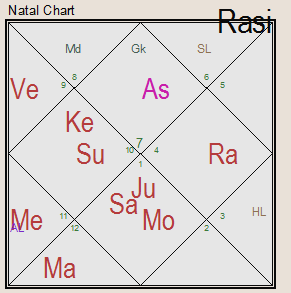 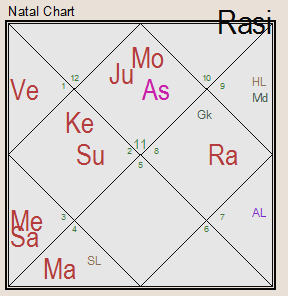 If you will look at the two horoscopes, you will find that planets are placed in the same houses, not all but some. Like Venus is in the third house, sun-Ketu in the fourth house, Mars in 6th house, mercury in 5th house and Rahu in 10th house.

Let us see the similarities of the horoscope with respect to placement of the planets only and we will not dwell into the signs and ascendants and moon sign.

Venus in the third house gives magnetic personality which used to be of S-1 and is of A-1. They both got proposals from the natives of opposite sex. Although the approach of both was different due to the change in the sign of Venus.

Jupiter and moon together or opposite to each other cause the famous Gajkesari yoga which is present in both the horoscopes and S-1 has experienced the blessings of this yoga umpteen times when there was no one to help a divine help was always present.

Rahu is placed in the 10th house of both the natives and it is said that Rahu in 10th house makes a native do Ganga snaan in his life time. A-1 has done it many times and also S-1 did it one in life. I will not disclose what is the point of that saying but yes in the time to come A-1 will take a long dip in the Ganges.

Sun is the natural karaka for father and in the chart, Sun is placed with Ketu. Both the natives have estranged relations with their father, sometimes it is good and sometimes it is bad. Mostly due to Ketu, there are many misunderstandings which become the reason for bad relations between the two.

The lord of the 7th house is the prime factor to see for marriage and then the 7th house itself. The native born in 2000 has three planets in 7th house in which Saturn is debilitated and it is not getting neechbhaga yoga.

The lord of 7th house is placed in the 6th house 12th to its own house. 7th house is severely afflicted due to punarphoo in the 7th house.

Both the natives will have a very bad married life. The 7th lord Sun of S-1 is conjoined ketu and he got married to a very vulgar woman. A-1 has debilitated Saturn in the horosocpe in the 7th house. He will serve the one he will marry and will have many extramarital relations too which will end in divorce sooner or later.

A-1 has a very good yoga to have gains from natives of opposite sex, 10th lord placed in 7th house shows self-oriented work which may be business or working for self.

Sun the karaka for father is the badhaka for A-1 being the lord of 11th house in the movable ascendant.

The most striking similarity in both the horoscope is the presence of only Rahu from house 8th to 12th which is seen for life after 40 usually.

There are many implications of Rahu in 10th house and it is immaterial to talk about it here. In the time to come, the native will see himself.

A-1 also has chance to get selceted in armed forces due to the presence of Mars and its aspect on the lagna bhava. But the lagna is severely afflicted due to the aspect of Jupiter and Saturn.

Best of luck to both the natives.

The most ironical part is that both the natives are not at all connected in any way with each other and are born at a very different place at a different point of time yet they crossed each other`s path at a time when things are going to change for both in one way or the other, call it destiny providence or anything.